Sunday morning, we started again. Thaddeus and Lela took the day off to celebrate his birthday. Paul came to help and he beat me to the house! I believe his first words walking in the door were something like “wow, Orange!”. yes, indeed, the craft room came out a nice bright color. Paul did a second coat, while I touched up the living room.

Talina’s classmates Nicole, Carole, and Carole’s boyfriend Steven came to help: The girls got the fun job of painting the incredibly crazy colors in the dining room: chalkboard and bright blue!

And here’s the dining room, nearly finished! Such a huge difference from the white walls…

This is a view into the (finished!) craft room, from the dining room – nice display of all 3 main new colors!

So, remember that ugly corner unit in the dining room? Yeah, that thing. Hideous. So we decided to take it out!

Here it is disappearing – Thaddeus and Lela went at it with crowbars but it turns out it just popped right off!

Behind the corner unit, we found out that the previous owners had painted the walls… so the original (awful) wallpaper was still back there. Okay, no problem, we wanted to repaint anyway! 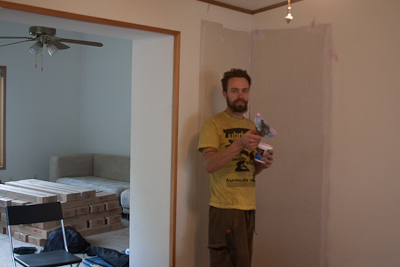 BUT.. the owners had also added texture to the wall when they painted. Of course, there was no texture where the corner unit had been, so… time to remove the texture! Thaddeus went at it with a sander, and got a little dusty in the process… 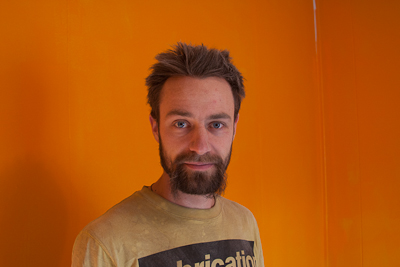 Time to kick things off! My brother Thaddeus arrived with his goats late Friday night, and then I headed home to Portland for a few hours of sleep before… PAINT PARTY.

We had a great day today: got exactly as much done as we had hoped to accomplish, we’re right on schedule. Because we got all the walls washed on Friday, everyone was able to start right away painting the living room, craft room, and bedroom. Since we were replacing the carpet, it saved time not to have to lay down or tape any protective covering.
Here’s a neat slideshow showing the paint progress in the living room…

Thanks to my parents, sister and brother, and our amazing friends Krista and Duncan for coming by to lend their many hands. I could never have done it without you! …and thanks to our secret weapon, our goddaughter Elizabeth, who really pitched in!!

Today was the day! My sister and her boyfriend showed up at the apartment in the morning, and off we headed in some of the thickest fog I’ve ever seen in the valley. When we arrived… the keys weren’t where we’d been told they would be. Uh-oh. Actually, we could see a pile of keys in the house, but we couldn’t find the outside door key… Happily, we had the best realtor in the world, she answered the phone right away (IN THE DOCTORS WAITING ROOM!), got ahold of the sellers agent, and tracked down the keys for us.

First impressions… holy cow, there’s some work to be done. This is the mudroom at the back of the house… it’s obvious where the dog slept, isn’t it!? Stinks, too.

We took a break from the house and went for a walk.. Ana found an old watering can — here she is demonstrating that it still waters.

Around 1pm, the delivery guy showed up with an enormous pile of laminate flooring.. Turns out he just hauls it here, though, so we all had to stop our cleaning and painting prep and help haul heavy boxes from the truck into the house! They were so heavy we were afraid to put the all in one place on the floor, so we made 3 piles.. this is the one in the dining room. Thank you especially to Ana’s boyfriend, Johnny, for hauling heavy boxes in the cold on his birthday!!

After a long hard day: the contents of the fridge. Looking good!

Talina headed off for two weeks in Nicaragua with a school trip, which left me here to do the shopping… uh-oh. I’ve been doing some preparations for the getting the keys tomorrow!

Paint! We decided on the colors before Talina left, but I got the job of buying it. The lady at the shop helped me figure out how much was required… this is a massive amount of paint. It can’t freeze, and the temps are a bit cold, so here it is sitting in the stairwell of the apartment…
I have to thank our dear friends Courtney and Joe for the paint – Courtney recommended the brand, Miller, which is local, and the type, which is a low VOC and environmentally friendly mix. And she had coupons, so we made out like bandits: great quality paint from a local company, for an awesome discount. Amazing!!

More shopping — painting and cleaning supplies at Home Depot. We were able to convert some corporate rewards points I’ve earned over the last few years into a $500 gift certificate at Home Depot, and then I blew it all in just one week! But it was a relief not to feel like we had to hesitate over buying supplies, and since we are trying to stick to a tight schedule (to be done with the floors before Talina gets back from Nicaragua), it helps to not worry I’ll need to go back to the store in case I didn’t buy what I needed.

The last step of preparation tonight: my sister Ana came over and helped me haul plants from the deck garden downstairs and put them into Talina’s jeep, so we can drive them up to the new place in the morning. One fewer thing to worry about moving over the coming weeks.

And now… sleep! I feel like a kid on Christmas Eve…

So, although we officially became homeowners on the 5th, we have learned that we won’t get keys until the 16th. So while we wait, I thought I’d kill some time with some of the photos we took looking at other houses over the past year!

This first one was an interesting rabbit warren of remodels. The workshop in the basement was pretty amazing, gorgeous stone work… but the land had previously been a chop shop for old vehicles, and there were years worth of shattered glass and metal shards — not what wanted to be picking through while trying to garden!

The owner of this place just skipped town and left a ridiculous mess behind… furniture, food in the panty, dishes everywhere, clothes everywhere – an entire wardrobe in the master bedroom closet! It was spectacular. Unfortunately, although the land was pretty and the house pretty decent, the road into the property was pretty sketchy. We decided against risking being snowed in permanently if the weather got bad.

Honestly, this one broke our hearts. We really liked the place, but couldn’t get a response to our offer from the seller. It had such a beautiful view… very convenient to McMinnville and Portland. It was taken off the market and I don’t think it’s back yet.

This one was too expensive when we first saw it, and although we weren’t interested (far too steep to be useful land, unfortunately, and a long way down a dusty gravel road for what we were getting). But while we kept an eye on it, it dropped like a rock! Some days we talked about buying it just to put it out of it’s misery… but in the end, it just wasn’t enough to be worth it, even at the crazy low prices.

Two photos from this next place, because it was pretty amazing inside. The linoleum “carpet” print! The amazing 5′ long kitchen sink! We loved it, and the land was lovely… but the location wasn’t great, and unfortunately the well was broken, and the cost of a new well put the price too far out of our price range (and although the house had some neat components, it would have required an entire rebuild to be livable).

Sometimes I daydream about going back there and stealing this sink.

This is just a good example of the stuff we saw out there – dirt floors in basements and shops, huge gaps in walls and windows.

Looking back, even though we ended up paying more than we wanted up front, our new house is perfectly livable with just a few easy modifications – no rebuild required! Considering what we could have had.. we got a pretty good deal. 🙂

We spent most of 2011 trudging through rural homes for sale, mostly disappointed by either the price or the condition… often by both. We made offers on 5 places, offers that were often either ignored, or dragged slowly through financing questions and delays. As the year drew to a close we were starting to feel, I admit, a bit disheartened. My brother, who is a part-owner, gave up and headed off to winter in California, and it was looking like the year would end before we got anywhere.

In October and November we saw the Canyonview property. It was too expensive, and there didn’t seem to be a lot of running water, but those issues aside, it was an enormous lot, just over 40 acres, secluded and hilly with trees and trails. Only 45 minutes from Portland on a good day, and 25 from my family in McMinnville. The structures were in good shape, despite the home being manufactured. It was… pretty darn good, all things considered. So we decided to go ahead and try one more time, to see if we could find a bank to loan us the money, even though it was more than we originally set as our limit.

But Talina is nothing if not determined, and she managed to find a broker who shared her determination. Despite the enormous challenges in obtaining financing on manufactured homes (nearly everything in our price range was a manufactured home), especially on large acreages, they persevered, found a bank to finance.

And that is the story of how, after a month of delays and hand wringing, we came to be signing a 4″ stack of incomprehensible legal documents on December 5, 2011. So here we go… we bought a farm!